This first post is more an initial thought diary of the course to give a flavour for those interested. The next post will be more reflective on some of the issues raised especially around forgiveness.

The third of the seven residential experiences of the academic year for the year one and two Readers in training took place at MARJON in Plymouth this weekend. Normally my wonderful assistant chaplain, Margaret Sylvester-Thorne would be covering as she lives somewhat closer to the border with England but as she is away this one fell to me and a most interesting and fascinating experience it was!

It also reaffirmed just what a commitment it is to be a reader or ordained minister in terms of time and personal challenge, All these good folk need our continuing and sustaining prayer as well as our encouragement and help where we can give it.

The major themes of the weekend depending on the year group were Sin and Atonement and The Holy Spirit. I followed the Truro readers year two group in the main who moved between the two themes because they do not quite fit into the ongoing programme though all will be sorted next year when the courses are fully integrated.

Mercifully the drive up was in the sunshine…… which made for good conversation about what to expect with Jason and Judy with whom I travelled. The instruction to ‘bring my own mug’ made me wonder just how chaotic breaks were going to be. I need not have been concerned.

The hotel, a huge “Future Inns” next door to ‘The Range’ Headquarters is 5 minutes drive from MARJON and is a huge corporate affair but comfortable enough (except that the bed was rather hard which did my old decaying hip no good at all – but others loved them…. good for backs!) and after a coffee and chatting to a group of Readers in Training I went up to the top floor for the ‘cheesecake’ meeting when the staff get together for a final run through of who does what what, when and how.

That was really useful and I began to feel slightly less out of place. I did wonder just how useful I was going to be and whether anyone in an already set course group would need to speak to me at all.

However the chaplains gathered in the reception area as all the other students arrived and I found myself enveloped in hugs and greetings and requests to talk to me later……..

Then it was off the the college chapel to set up for evening worship before the first teaching session. This was the first inkling that the college were not wholly committed to making life easy for SWMTC to work within its walls. On the main altar was a memorial complete with a large portrait and candles for a student who had sadly died that week. If only the college chaplain had set it up on a side table it would have been reverential and easier to deal with but after some telephone negotiation it was agreed that it would be removed and replaced after each worship session in the weekend.  It worked but added a layer to organisation that was not needed.

The second clue to the college lack of hospitality was that none of the codes to get on to the MARJON IT system worked and there was no-one to sort it out so there was much to-ing and fro-ing with laptops and cables to provide work-arounds so that lecturers could use PowerPoint and video clips.

However the first actual teaching after a passable fish and chip supper in the dining hall was soon underway and I found myself perched at the side peering around the room to see how folk were reacting – as per the instructions I received at the meeting. It is quite tricky just to sit and watch!

The session on Sin and Atonement was led by Philip Sourbut the Joint Principal and was both full-on and challenging as he asked tricky questions about the nature of sin, forgiveness and repentance  all leading up to a period of reflection on a personal level about their response to what they might need to work on and a final question along the lines of ‘What do I need to do to align myself to the economy of God’s Kingdom?”

Following the session as I met folks back in the bar at the hotel those questions were much discussed and the latter greeted by several folks with a “what??????” But one person I spoke to had found that it hit the nail on the head for them and I spent the bulk of the time before bed in conversation with them about how they were going to act on it. Fascinating but also a huge privilege to listen.

My half a Teleys exhausted I headed to my room and the large bed that felt to me like lying on a sheet of hardboard with a sheet over it.

Morning could not come soon enough.

More after the picture…… 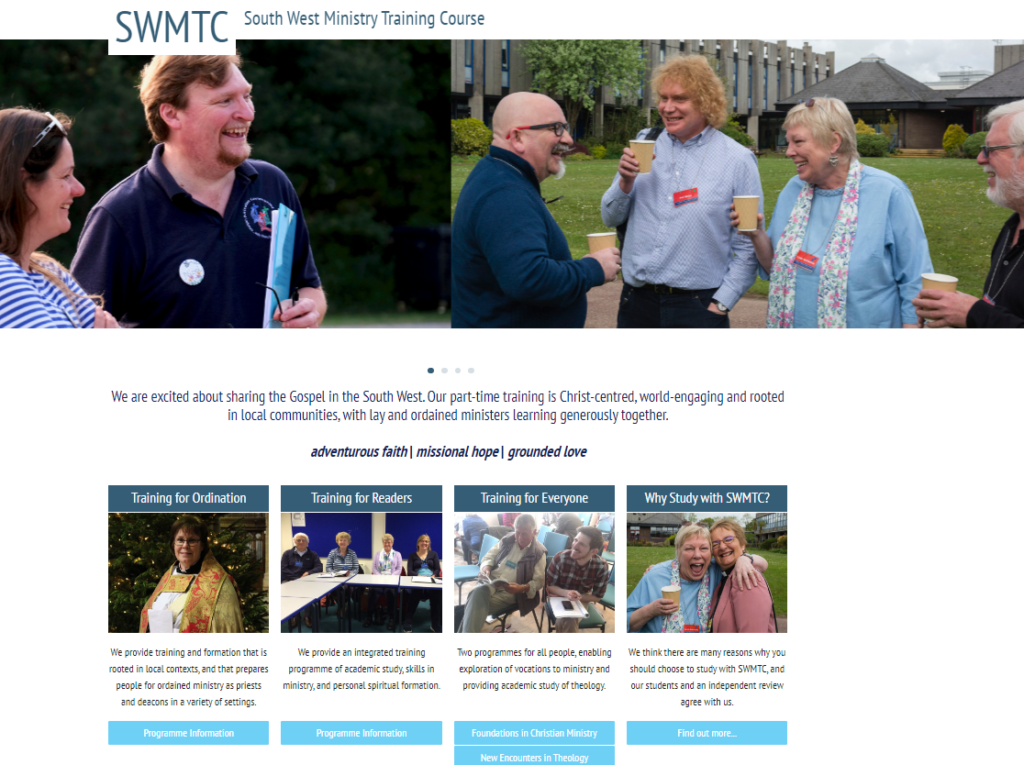 Breakfast was at 7am during the eating of which I tried to agree a date with several readers in training who still needed to do safeguarding before their placements so after several conversations and emails we had suggested dates….. but no agreement.

Then having grabbed a quick glass of fruit juice I then got involved in a conversation about safeguarding and chaplaincy in the Coastguard which probably opened more questions than it answered but was really interesting.

A quick check of my room, cleaning teeth etc, I grabbed my bag, fled downstairs ( I refused to use the lift to the first floor after the first trip- I need the exercise!) and checked out.

The first Session led by Sue Sheppard in the chapel was ‘Bible Study’ and was a fairly gentle introduction to when different versions were printed and a comparison of beards of the main characters involved from Tyndale and Wycliffe to King James! Suffice it to say my beard would not compete and neither would my knowledge!

Common Worship morning prayer led by students buffered the next session attended by both years of Truro Readers, Led by Dr Cheryl Hunt on Sin and Atonement in the Bible.   Personally I really liked the fact that after the safeguarding slide the learning objectives were displayed so I knew where things were headed! More than several  folks I spoke to were quick to point out that they ‘could listen to Cheryl all day’  and it lived up to expectation.

After coffee using my own mug as instructed and a conversation about Spiritual Direction in the Diocese of Truro with an Ordinand I followed the year two students to a session led by Dr Dominic Cyrus on “who is the Holy Spirit” which was part of the Christian Doctrine strand.  Students had tried to describe Dominic’s teaching style to me but to sit in on a lecture is to be both entertained and challenged. It is what I have long-termed ‘performance teaching’ – excited, fast paced and high powered.  The only slight negative for Truro year twos was that the Exeter year twos had this as a middle session of three where for Truro it was a stand alone session that had not had the introduction and would miss the conclusion to the topic. But this would not happen in future years when the courses all matched up.

Part Four- Saturday lunch and beyond…

The Buffet lunch provided more opportunities for conversation this time mostly about getting emails with the results of essays – the timing not being wonderful arriving as they did during the residential.  I suppose the notion is that if people needed to talk to someone about it they could.

The sandwiches were very good- although it would have been helpful to have a few labels describing the contents. I did have my mug and could have murdered a good mug of tea but I had to make do with visiting the shop and making do with a bottle of Coke…. which served to remind me why I have not drunk coke for so long! It did wash down the cake and and infuse enough caffeine to counteract weariness.

The “Sin and Forgiveness in the Gospels,” session was led by our own Director of Reader training Jane Kneebone. The after lunch slot is often called “the graveyard slot” because having worked hard and eaten the temptation to nod off is quite strong. This session, although at a quite subdued pace compared with the Doctrine lecture, had just enough interactive involvement to keep everyone going as they worked through the various issues and scenarios.

FOllowing a break most people were back together for “When Things go wrong” with Rev’d  Dave Carrington which was less about things going wrong and more about practical aspects of and approach to sermons and preaching. The session had me both involved and frustrated because as Chaplain I am not supposed to join in and not speaking on something I am passionate about it was tricky to put it mildly! Dave (Also one of the designated safeguarding officers) showed clips of  comedian Michael McIntyre and a singer, Rag’n’bone man singing passionately ‘I’m only Human’. and a couple of other examples that drew out various aspects of the skill of preaching.

It was very well received as a round up for the day.

Worship in the Chapel was led by students with three reflections on parts of a reading from Isaiah. As a trainer of worship leaders I itched to feedback not to be apologetic for the technology….. just concentrate on what you are doing…. even when things do not go quite right more often than not nobody notices if you just act confidently.

I do wonder if the folk leading worship need a little lesson in using the rather good technology already in the chapel.

Following the worship I sat with the Truro Readers to gather their reflections and make enough notes to write up a report later!

The drive home was dark and damp, the weather providing normal service but the conversation was good and as we drove I added items to my growing To Do list. I arrived home sometime after eight, collapsed in my chair with a couple of pieces of toast and a mug of tea and watched some old TV programmes to switch off….

It was an excellent course, with skillful, knowledgeable  lecturers and I felt used and useful as chaplain…. which, after all, was what I was there for.

The Church of England’s Ministry Division is looking for an experienced lay minister…..

Pages in this site