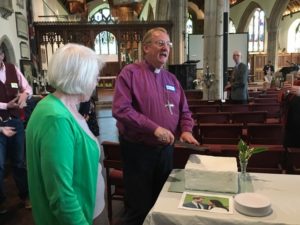 I know you are not officially a Bishop any more in your new role but for me the title is something I think you may be stuck with.

When someone moves on to other things it is interesting to reflect on the impact they have made and the shape of the hole that they have left. With some folks the hole is not much than a dent and with others it’s not so much a hole as a pile of debris that has to be cleared away. Thankfully neither of those applies to you.

The impact of your ministry on me  personally has been huge and through that I am aware of some of the impact across the diocese.

Although I had been getting increasingly involved in Reader life since I retired from my paid job in 2009 spending some time as Deanery Reader Steward and somehow getting the job of producing a three fold brochure on Reader ministry there was none so surprised as I at getting an email from you inviting me to be on the panel to select Readers for training in 2014.

The conversations that day with you and Jane (Kneebone) as well as the amazing privilege of listening to the faith stories of the candidates set me on a whole new path. From preaching and teaching and organising stuff my ministry became more and more about listening which if you were to speak to my wife Lez she would tell you that me actually listening is a miracle. I am not sure that it would count toward your beatification however 🙂

So as a result of that I was asked to help on the course and  became chaplain to the course later that year.  Then eventually I took over from Chris Kingshott as Chaplain to Readers.

So part of your impact is in that wonderful ability to discern the skills of others and to open the opportunities to flourish both for me and for many others over your years as Bishop of St Germans.  The wider impact being the empowering of others and delegating responsibility which enables the holes one leaves to be filled much more easily. Hence the role of Warden sitting with a small committee until a new one is formally appointed.

Another aspect of your ministry that impacted upon me in particular and I suspect in many others was your ability to ask the probing question that would set one’s mind on a different tack or to cut to the core of an issue. Asking the right questions is such an important skill.  That some folks may not have altogether enjoyed that challenge is the hard stuff of being a leader but challenge is what we all need if we are to grow.

Your support for and belief in Reader Ministry really did make us feel valued and that we have a special part to play in the modern church even with the pincer movement of other lay ministries and the seeming dominance of some ordained ministers! (not my Rector, I hasten to add- just in case he reads it!)  I for one am thankful that your experience with us in Truro will be put to good use in your new role where I hope that support of Reader ministry may be seen  in a wider context and have greater impact.

Thank you for your challenge, for your invitations, for your encouragement, for your compassion and your belief in the skills and the callings of those under your wing.