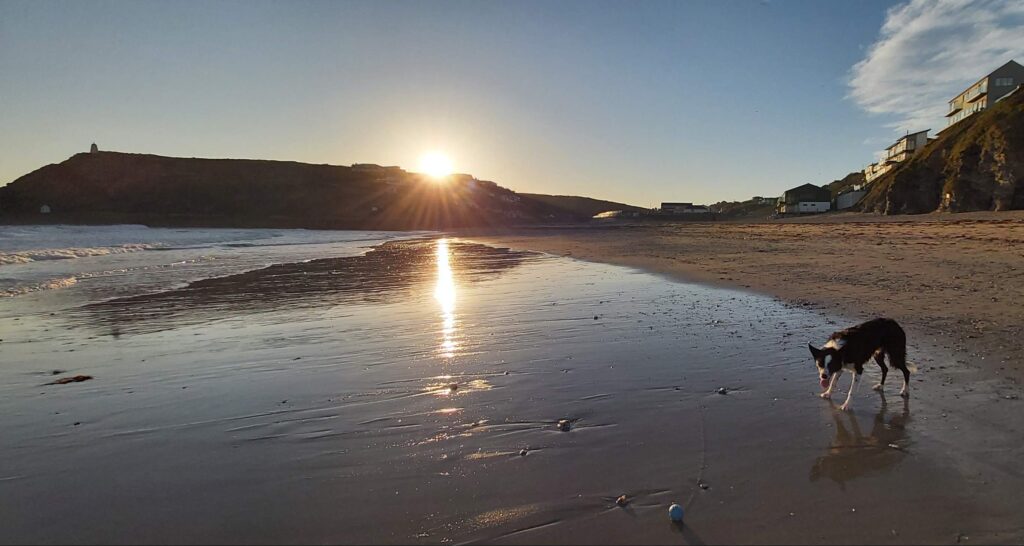 Life with Barney a.k.a. Mr Dog enters its second month with more early morning walks. This week the tide has been fairly low first thing so we have gone down there most days. Mr. Dog is very good at returning the missiles launched from the ‘Chukkit’ and so exercises hard for an hour. If he needs a break he chases the waves instead while we take in the joys of being alive under heaven from the dawn and the sea air.

One end of Portreath Beach is freezing and the other end is warm once the sun begins to get to it. Prayers today were for those who for one reason or another cannot enjoy the warm enfolding of the rising sun or the Risen Son. (I post on photos and prayers on Twitter @Trewirgies )

An Interview with Carrie Tucker as she leaves the Diocese and he role as Secretary to the Readers.

So in attempting to replace Carrie with three people we have so far received enquiries from er…. one person.  Readers / Licensed Lay Ministers we really do need you if you have minute taking skills, enjoy organising events or just want to help your fellow Readers in a practical way. I asked Carrie the question that we so often ask those discerning their vocation to become a Reader which is; If you could only preach one(more) sermon what would be the topic and why?  Carrie only thought for a moment before saying that it would be a bout practical love – all very well to follow Jesus commands to love one another but practice has to follow intent and rally that is what Carrie has done, to love her felw Readers through service and for that we are all hugely grateful. In the interview she says what she enjoyed and some advice for us all – please do pray for Carrie and pray for your own evolving vocation and ask God if it is something to which you should contribute some time.

I attended the course yesterday ably led by Dawn from somewhere in the South East on ZOOM. It is always good to be reminded of these things although through my work as a Governor and in my pre retirement career in primary schools I was steeped in the culture of non-discrimination and often had charge of writing the equalities policy. the racial abuse policy and the bullying policy as well as the school access plan so I probably did not learn anything new.

When I moved to Cornwall from London having been brought up in Birmingham where my friends were from a variety of ethnic backgrounds I was actually surprised by the level of racial prejudice. Examples were often preceded with the phrase, “of course I am not racially prejudiced but………………..”  At the time (1978) I was teaching 38 children in a temporary classroom in a medium sized village school. When plotting where the children had been on holiday I was amazed that 10 had never visited the beach and  only five had been abroad and one of those was Plymouth!  Racial prejudice, like all prejudice I suggest comes from ignorance rather than knowledge.

As a church we discriminate against the over 70s, the divorced, the non-heterosexual and even those with a different coloured skin.

Mind you, I should probably not refer to holiday-makers as emmets or suggest that a number of them will  be abusive to till staff.

It is easy to become comfortable in our own skin and not question the values we hold and whether they prevent us from loving our neighbour as ourselves, or loving each other as Jesus loves us.

Living in Love and Faith

The Church of England LLF resources

The discussions were certainly frank and varied!

We can however, recommend looking  at the Preview of the Course Materials which are really good, professional looking and stimulating for conversation.  Course: Introduction (churchofengland.org)

A Story – The Abbot and the Rabbi – retold.