Psalmists Cry on the Beach

When I had my right hip replaced in  2012 the surgeon asked me about my expectations for it afterwards – what did I want to be able to do?

My reply was something about being able to sit on the floor to play with small grandchildren and walk the dog – perhaps even the walk from Godrevy to Hayle along the beach.

He was reassured that I was not intending to go climbing, do a parachute jump, go trampolining or surfing  or sit in sports cars with very low seats and prescribed a hard wearing ceramic job for my needs.  Since then I have done a bit of bouncing on the trampoline in the garden and I have sat in a sports car but in the main I have followed orders and the hip has walked over 5000 miles at a very conservative estimate however until Friday I had not done the beach walk I had set as an early target.

On Friday I dropped Lez (my wife)  at St Michael’s hospital in Hayle to have the offending lump removed from her breast and set off for Godrevy at 7:30 am to walk and pray. The tide was not due to turn for a couple of hours and there was the incentive of breakfast at Godrevy café afterwards. 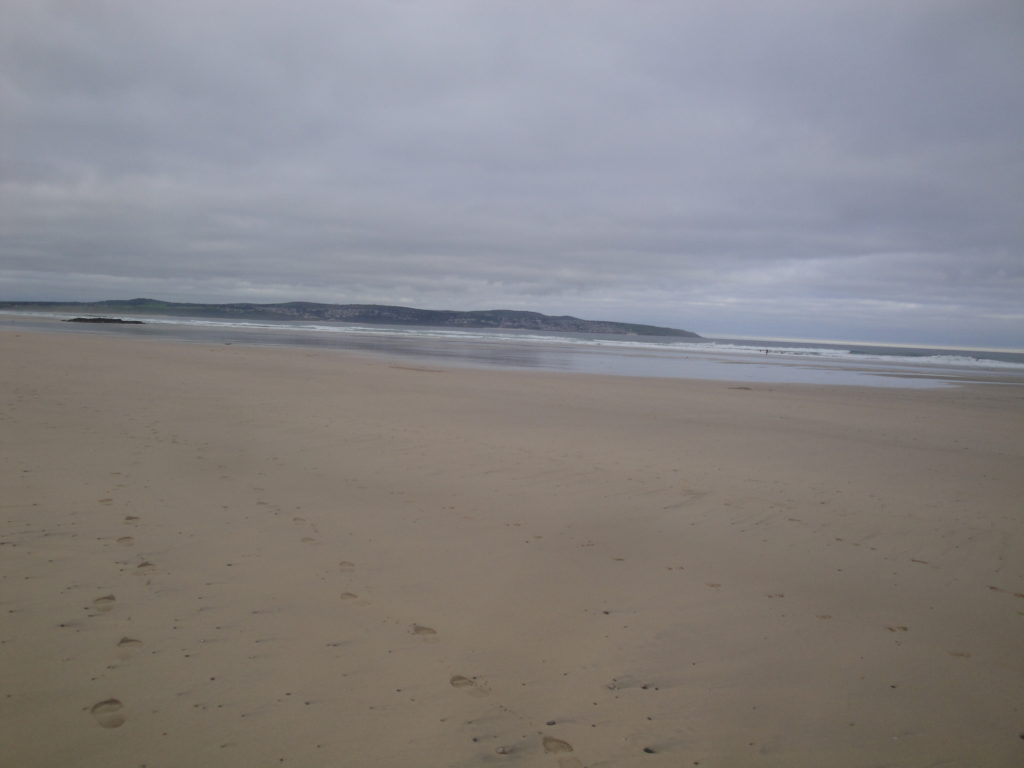 There were very few people about at 8 am; just a few surfers, dog walkers and joggers so it was a solitary experience for a couple of hours –it would have been lovely to have had the company of a dog!

Its amazing how much praying one can get done on a  solitary walk with miles of open empty beach stretching out before you and the gentle sound of the sea to accompany you. It was as much a pilgrimage for me as any journey to a holy shrine and I found myself in full psalmist mode pleading (rather than the complaining or moaning ones) not just for Lez and her surgical and care team but for all those on my “Readers-Plus” prayer list. 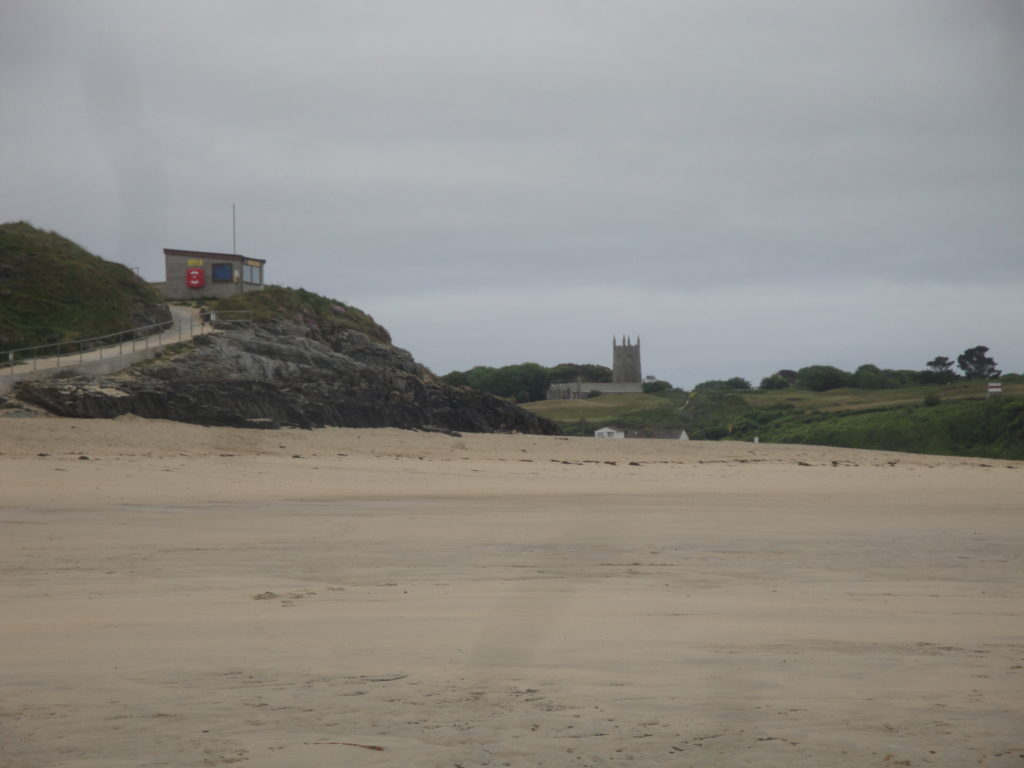 I got back to the car park a couple or hours later with somewhat achy feet and hips and was somewhat dismayed to see that queue for the café stretched down the path and into the car park – it seems Friday morning is a popular day. So I cut my losses and headed home to make myself a healthy mackerel salad and telephone the hospital for an update.

Those calls really bring to mind all the people in the same position across the land worrying for the health of a loved spouse or family member. It seemed that she had not gone to surgery yet but she was quite happy and did not need anything and to phone back in a couple of hours!

The next call was a bit of a déjà vu moment as she was still waiting and I had to phone back in a couple of hours. So I busied myself with Sunday’s sermon and after several phone calls I eventually collected a cheerful looking Lez at 7:70 pm Arnold the lump having been safely evicted!  From Kallie the surgeon to the student nurse who had spent so much time popping in, the whole team was professional, calm, cheerful, friendly and optimistic as well as giving the impression that they had time even with a full schedule!

The house, as I write looks like a florist’s!

It says something about the power of prayer when Lez says that she ‘actually had a lovely day!’ Her recovery has been remarkable so far and folks in church yesterday were not only surprised to see her there but at how fit and healthy she looked.

I preached my sermon twice in the benefice yesterday having thought much about the story of Paul and Silas casting out the spirit of divination from a slave girl who annoyed them which earned them a beating and a night in gaol; the conclusion being the praise meeting followed by an earthquake, the conversion of the gaoler and hospitality.  For me though I kept getting side tracked by the slave girl.

Having led a C1 safeguarding session down at St Erth on Tuesday evening with 30 or so lovely people my mind was attuned to modern slavery, human trafficking and  sexual slavery which is what that poor girl was suffering when Paul and Silas got involved.  But her story is confined to the anonymous folk whose stories are never completed in the dustbin of history.

In a Twitter post Rev Simon Cade summed it up as, “abused child speaks the truth, silenced by powerful men, they get locked up anyway but they charm the authorities into release. Nothing modern there then!”

In Paul’s day slavery was accepted, it was legal, common place and a commercial venture but these days those opinions, like some other biblically historic opinions, are out of place but sadly still prevail even in Cornwall. Newquay has its problems with pop-up brothels where holiday lets are used to trade the services of trafficked women for sexual services and in other places gang-masters run gangs of agricultural workers.  Across the country and the world the problem is vast!

So a plea, please add the victims of modern slavery to your prayers – all those who, like the slave girl robbed of her one skill that made her of any value, have lives that are controlled by those with more power with little chance of freedom.

It’s the stuff of psalms.

Sometimes blogs take a long time to write especially when one is on call to change surgical stockings (I am very efficient now) appoint headteachers or select new readers in training but the best news is that yesterday Lez went for tests following her surgery to be told that all is clear so thank you all for your prayers – they worked! 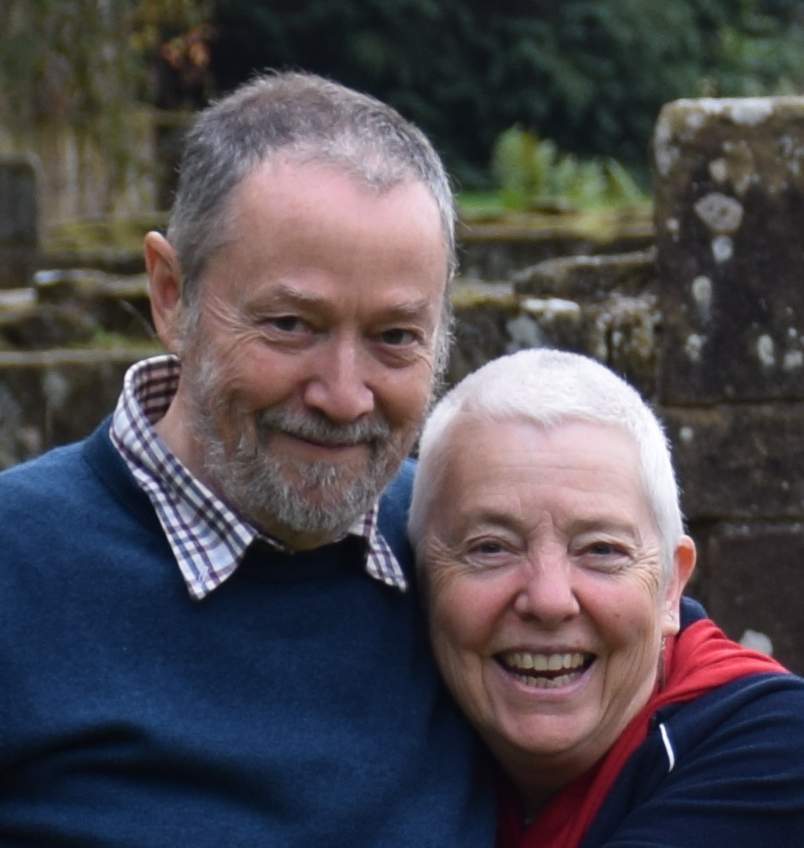 The Training and Maintenance of Readers 1919