Bishop Philip pointed out that I had written to Esteemed Otters…. so I could not resist ‘Googling’ (or more accurately ‘Bing-ing’ some.

Katharine Hepburn, in her own words:
“Once when I was a teenager, my father and I were standing in line to buy tickets for the circus.
Finally, there was only one other family between us and the ticket counter. This family made a big impression on me.
There were eight children, all probably under the age of 12. The way they were dressed, you could tell they didn’t have a lot of money, but their clothes were neat and clean.
The children were well-behaved, all of them standing in line, two-by-two behind their parents, holding hands. They were excitedly jabbering about the clowns, animals, and all the acts they would be seeing that night. By their excitement you could sense they had never been to the circus before. It would be a highlight of their lives.
The father and mother were at the head of the pack standing proud as could be. The mother was holding her husband’s hand, looking up at him as if to say, “You’re my knight in shining armor.” He was smiling and enjoying seeing his family happy.
The ticket lady asked the man how many tickets he wanted? He proudly responded, “I’d like to buy eight children’s tickets and two adult tickets, so I can take my family to the circus.” The ticket lady stated the price.
The man’s wife let go of his hand, her head dropped, the man’s lip began to quiver. Then he leaned a little closer and asked, “How much did you say?” The ticket lady again stated the price.
The man didn’t have enough money. How was he supposed to turn and tell his eight kids that he didn’t have enough money to take them to the circus?
Seeing what was going on, my dad reached into his pocket, pulled out a $20 bill, and then dropped it on the ground. (We were not wealthy in any sense of the word!) My father bent down, picked up the $20 bill, tapped the man on the shoulder and said, “Excuse me, sir, this fell out of your pocket.”
The man understood what was going on. He wasn’t begging for a handout but certainly appreciated the help in a desperate, heartbreaking and embarrassing situation.
He looked straight into my dad’s eyes, took my dad’s hand in both of his, squeezed tightly onto the $20 bill, and with his lip quivering and a tear streaming down his cheek, he replied; “Thank you, thank you, sir. This really means a lot to me and my family.”
My father and I went back to our car and drove home. The $20 that my dad gave away is what we were going to buy our own tickets with.
Although we didn’t get to see the circus that night, we both felt a joy inside us that was far greater than seeing the circus could ever provide.
That day I learned the value to give.
The giver is bigger than the receiver. If you want to be large, larger than life, learn to Give. Love has nothing to do with what you are expecting to get – only with what you are expecting to give – which is everything.
The importance of giving, blessing others can never be over emphasized because there’s always joy in giving. Learn to make someone happy by acts of giving.”
~ Katharine Hepburn
(from Everything Good in the World)

The Living inLove and Faith Launch

Last week’s emailing to Fellow Readers/LLMs, Church Family and Esteemed Otters (Others) was hurriedly sent around the Living in Love and Faith Launch last Saturday morning. I  had written a piece about that Launch but Bishop Hugh’s letter that arrived in inboxes yesterday says it so much better that I have linked it here in case you cant find it in your inbox.  It was a very worthwhile morning, and where I do not think it will change much in the way of canon law etc in the near future, I do believe it is a good way forward to promote understanding and a dialogue that is rooted in our love for one another.

I propose that as Readers we might actually do the sessions and go through the materials in a ZOOM format sooner rather than later with perhaps one group meeting in the evening and another during the day. (it would be helpful to have some keen folk to facilitate this though I am happy to set up links.

Please do read +Hugh’s letter and then let me know what you think. 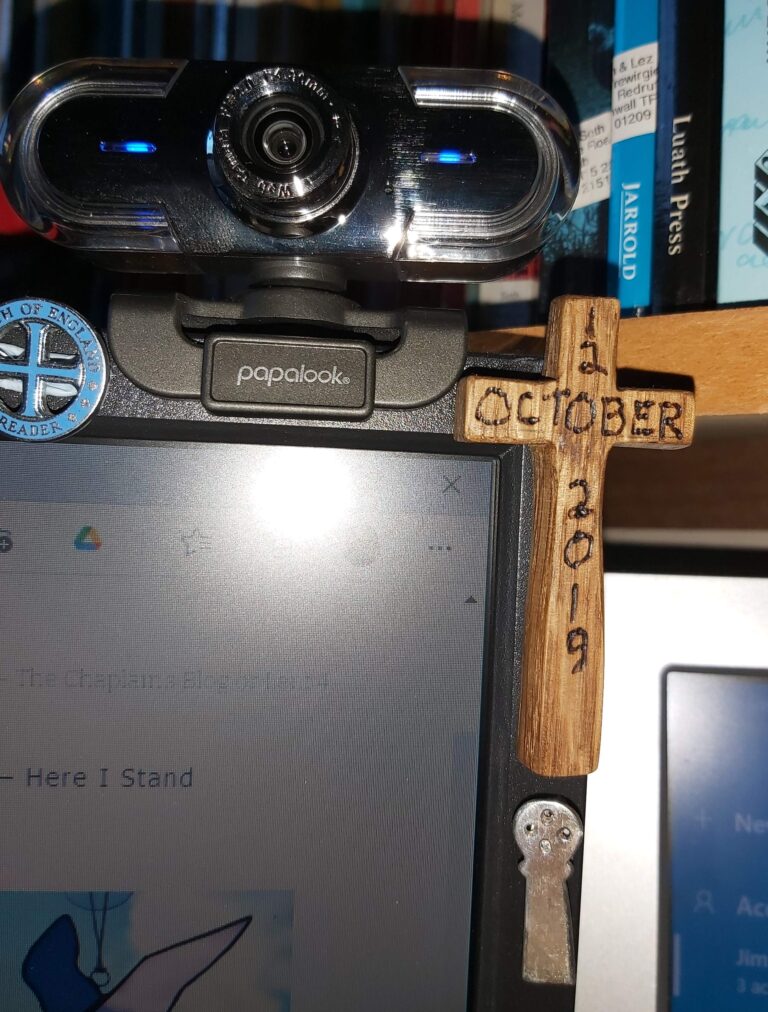 I am now the proud recipient of a St Pirans cross which I shall wear alongside my Reader’s badge when I wear a jacket which is rare these days. For now it is pinned to my computer screen with my Reader Badge and a cross made by Reader Robin West for the Readers in Training residential  at Epiphany House.  Note-my ready Webcam for this morning’s Morning Prayer Zoom.

The service on ZOOM was  uplifting in hearing and seeing all the people who were doing things to support their various communities from technology support to food bank and feeding people in poverty.  If you have not red the citations, they are really worth reading on the Diocesan Website as are the articles written by Jac.

Finally, our evening TV (channel 4)  has included the wonderful series with Martin Sheen as president of the United States, “the West Wing” here is a clip of  the president talking to a right wing journalist relevant to the Living in Love and Faith Debate even if I am not sure about his point scoring tone…. which is not in the spirit of LLF.

Of Retreats and Retreating – A Zoom Experience